In the past, I had assigned several projects to my public health and data analytics students on this topic. 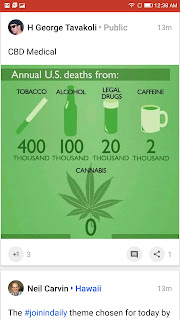 In the past, I had assigned several projects to my public health and data analytics students on this topic.

It has been a while, and needs to be looked at again. But, here are general take-home message that we had short-listed from past studies:

1. Unlike Cannabis, other mentioned in this image have been studied for an extensive period of time, and we know the effects to a greater extent.

Moreover, mortality rate /frequency rate of death with respect to usage is more important, and the percentage of the population drinking alcohol and taking tobacco should be significantly higher than other listed.

2. Further, literature suggests that cannabis is like a GateWay drug, which our founder pointed out years back, and we have seen at least two instances in the recent times where amphetamines were found with Cannabis users.

3. Research suggests that marijuana is a resources intensive crop, in terms of water, energy, and land needs.

With global climate changes being a major concern, we don't want to add one more to this list.

Further, we could lose out land for growing primary crops that provide essential nutrients to humans.

4. With stock market playing a big role in promoting this business, and with stocks supposedly skyrocketing by more than 1000 fold in a short span, investors in this space will take further control of land and crop management decisions in the same light as NRA is doing with guns.